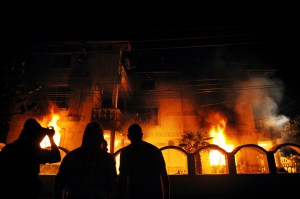 Police officers secure the area near a burning guard house outside the home of the Roma leader Kiril Rashkov, during a clash between members of the ethnic Bulgarian and Roma communities in the village of Katunitsa, 160km south-east of the capital Sofia last month. Nikolay Doychinov / AFP

People watch the flames outside the house of Roma leader Kiril Rashkov, dubbed „King Kiro”, after it was set on fire during a clash between members of the Bulgarian and Roma communities in the village of Katunitsa, some 160 km south-east of Sofia on September 24, 2011. Two youths died and five were hurt as Bulgarian and Roma communities clashed in a southern village following a fatal road accident involving relatives of Rashkov, police said. Family and friends of the accident victim, a 19-year-old who was walking his dog when he was hit by a minibus carrying relatives of Kiril Rashkov, attacked Rashkov’s home and set it ablaze.